Friday thoughts on a Monday afternoon

Last Friday afternoon work started to empty itself from my inbox at around three in the afternoon as out of office replies starting pinging their way at me in response to my truculent queries and insistent demands to those who were apparently still at lunch. At four with the umpteenth email promising to "get it done by Monday" I packed it in and walked through a sun saturated City that promised a return to summer for the weekend. The City’s glass towers had purged itself of it’s be suited inhabitants and vomited them into the pubs that they themselves would spew out of (quite literally) under the watchful eye of the moon. But for now there was camaraderie in the air, an azure sky and golden goblets of bliss held by many hands as they stood outside the Globe, All Bar One and O’Neill’s.

Minding my own way I wended down to the river which was littered with a thousand sparkling diamonds that must have fallen from the careless diamond fairy's handbag as she dropped off for a much needed nap on the cool waters under the glowing orb in the sky. I walked back towards St Pauls and heard Bow Bells sound five peals for the foolish workers who had lost track of time as they sat ensnared by the pure white light from their monitors that trapped them like flies to sticky flypaper. Below the spires of commerce and at dark wooden pub doors; blue silk and linen jackets were slung on clever shoulders, men’s sleeves were rolled up demarcating the vacationers from the staycationers and the bubble of laughter and chatter gurgled in the air like some ancient village brook in the heart of this old City.

The white sun was edged with gold now as it sliced lower through the glass ramparts and po-mo facades at London Wall only being defeated by the hulking irresoluteness of the concrete fortress of the Barbican. Little velvet squares of manicured lawn under shady plane or chestnut trees were a brilliant lime green like the new neckwear recently appropriated by Waitrose supermarket staff. The white asphalt under our feet glowed as it was branded by the sun above. Fat bees weaved in the air dizzy and drunk on nectar and sunlight, skimming fair and dark heads unshielded from the fury of our solar stranger which was reflected at us by the glass on the cathedrals of industry that rose arrogant and insouciantly above us.

Many hours later I was still sitting on a splintering wooden bench outside a pub that would soon be demolished to make way for a grand transportation project that was at least seven years away. The sun had slowly melted at its heart bleaching the sky in a lactic whiteness bleeding at the edges with a thin frayed border of fading fuchsia.
As violet banded the horizon, white light spattered on within the red double deckers trundling past us and the flow of folk and nectar started to ebb. Like good wood left out too long in the sun a splintering started that saw the large masses break off into chips of twos and ones drifting to the rail stations or slipping down stairwells to the trains that sped along long tunnels under the tar or clambering onto red buses heading north, south and east.

As I walked homeward I noticed that the asphalt has lost its daytime sun seared white -even though it had now cooled dark and grey it still tingled and sang with an electric hum that promised that the best was yet to come...
Posted by michaelbragawrites at 06:49

Moi against the Brick on Brick Lane 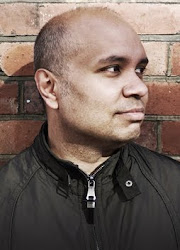 Welcome to my world

A world that's inhabited by authors, publishers,agents, writers, celebrities, delusionaries, illusionairies, dreamers, thinkers, inventors, mad scientists and everyone who is positively brimming with ideas in this rich life we are given and puts those ideas into play.
So take a moment from your own playing to relax, unwind and catch up on the world through a unique perspective, right here and remember if you read it you can feed it back to me via a comment...

michaelbragawrites
London, United Kingdom
Fun creative and driven looking for likeminded writers who like London and writing as much as I do